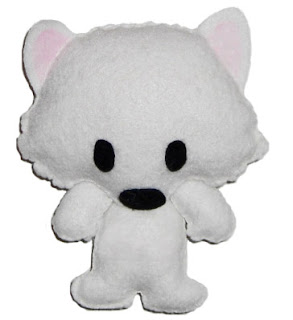 I've been doing really well these days. I am so full of energy and the weather has been great. I now get to take walks to go potty every few days. Mommie says my pooping in the shower is pretty convenient but for me, it still feels wonderfully natural to be able to go potty in the outdoors.

For Memorial day weekend, I got to go on some awesome adventures. I got to see and sniff so many new things. We drove to see the Old Faithful Geyser in Calistoga. It was pretty neat. The geyser shot hot water into the air every few minutes. In the pool of water under the geyser, there were some tiny fish swimming around. I guess the water is not hot enough to cook them. 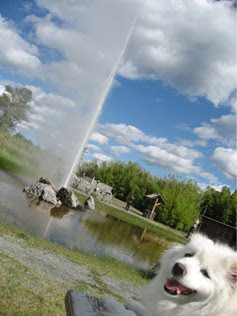 It was a beautiful day but very sunny. I kept squinting so they put some sunglasses on me. At first, I thought I'd look funny so I wanted to take them off. But when I realized the benefits, I decided to keep them on. 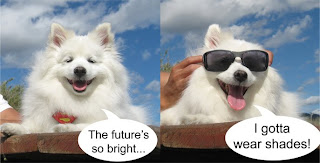 I think I look pretty cool in them. Hehe! 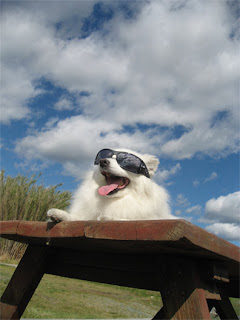 There was not much else to do at the geyser but sit and wait for the water to come out so it was quite relaxing. They had some animals on the property so we went to check them out. I said hello to the goats first. The babies were nice and said hello too but the older goat kept ramming the fence with his horns when he saw me. It was scary and Mommie picked me up right away.

We saw some llamas too. Their teeth look so funny. 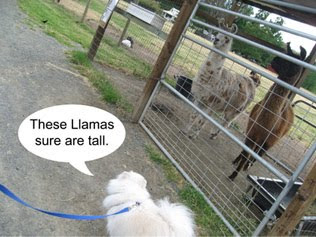 And there were these sheep with huge horns. Before I got sick, Mommie was hoping to get me into sheep herding. I think the sheep will just think I am one of them.

After that we drove through their downtown. They have a very pretty view from the streets. 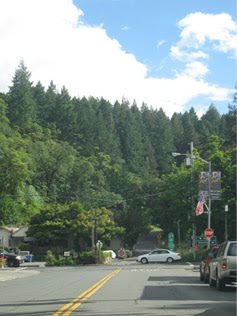 We ate dinner at the next town. We saw this statue of Snoopy. It is called Rainbow Joe. I kept sniffing the flowers and fruits but it turned out, they were not real. 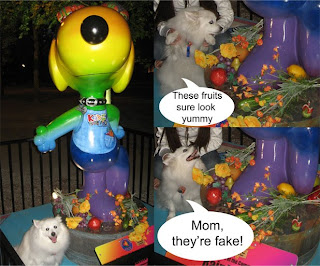 Earlier, we stopped by a doggie boutique and the lady there gave me some beef snackies. Mommie even got me this ice cream treat at the doggie store. It's pretty big so it's gonna last me a few days. 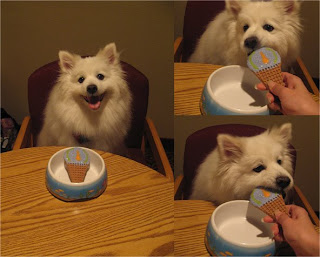 The next day, I got a wonderful surprise. I got to go on the river! We rented this inflatable kayak. It was so much fun. 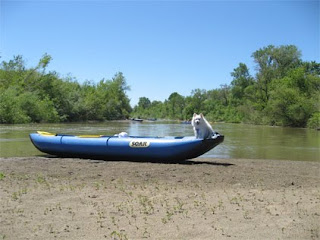 I sat at the front of the boat and kept a lookout for fish and birds and dragonflies. There were lots of other insects so Mommie was busy batting them away from me and getting rid of them from the boat so they would not bite me. I don't think she realized there would be so many insects there. She spent half the time using the paddle to bat away insects instead of paddling the kayak. Haha! We saw another kayak with a small doggie on the shore and I said hello to the doggie from afar. I think he was a Yorkie and he had a life vest on. Mommie wanted to get me a life vest too but when we tried the small size, it was too small for my body. And when we tried the medium, it was ok for my body but my head kept slipping through the neckhole. The lady at the rental said unless it was a snug fit all around, it would be useless so we did not get it. But the water was calm so I did not really need it. 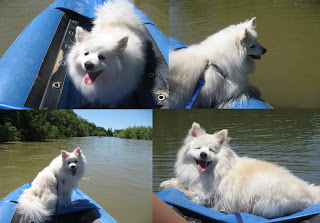 We stopped a few times and I got to wade in the water. The water was a bit cold but it was refreshing coz it was a hot day. I got to play with branches in the water which was super fun. I did not dive in all the way coz I did not want to get my face wet. It would ruin my look. Hahaha! Mommie was already making fun of me coz my legs looked so skinny when they were wet. 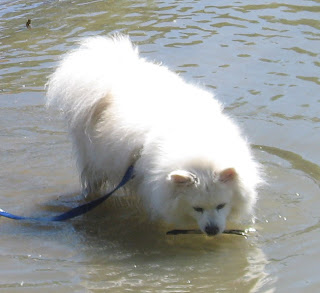 After the river ride, we stopped by a winery so I could get some rest. These chairs are pretty comfy. 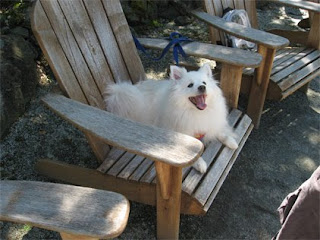 I even got to try out their jeep. 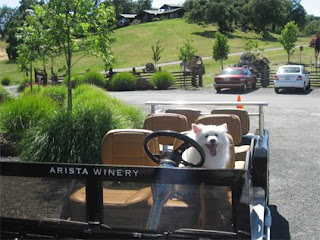 Before we left for home, we got some food at a nearby burger place. Beside it was a hat store, so we borrowed a hat so I could sit at the table incognito. Hehe! The pawparazzi will never recognize me in this disguise. 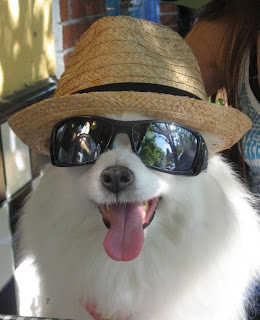 I feel so lucky to be able to go on these adventures. When we got home, Mommie was saddened to learn that more doggies with my disease did not make it. And others had relapse scares over the weekend. So many of the posts we read on the message board are exactly what we have faced and it is sad knowing so many others are going through the same. I hope when they read about my adventures, they will know that there is hope.